Free shipping on orders over US$89.99 in Hong-Kong, Singapore, Australia, New Zealand and more (See full country list qualifying for free shipping)
Order your gifts now to receive them on time! 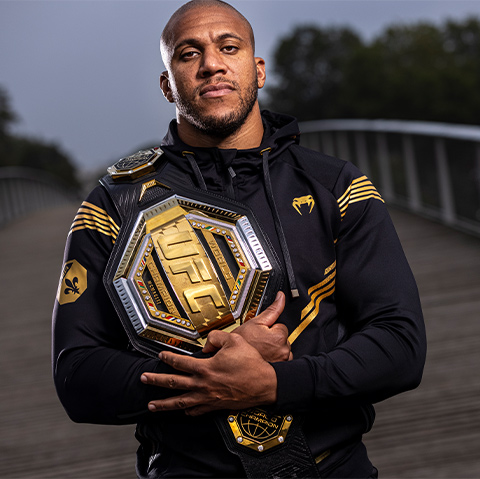 Ciryl "Bon Gamin" Gane is a French MMA ( Mixed Martial Arts) fighter, known for his highly technical and strategic fighting style as well as his aerial footwork, a rare quality in his weight category. He is considered today as one of the most promising fighters of his generation. Ciryl Gane was born in La Roche-Sur-Yon (France). Very athletic and sporty from the youngest age, Ciryl made his first steps in the world of combat sports at 24 years old. He joined a Parisian Muay Thai club where his potential was immediately noticed. After his first amateur fights, Gane became the semi-professional champion of France in 2016. A year later, after turning professional, Ciryl again won the national title twice (2017,2018). In 2017, the French fighter creates the sensation by winning his fight against the number 1 Muay Thaï Heavyweight in the world, the Belgian Yassine Boughanem. In 2018, Ciryl Gane joined one of the most reputable MMA clubs in France - the MMA Factory (Paris). He was rapidly improving his skills under the guidance of his coach Fernand Lopez and made his debut in the cage in 2018 in a Canadian TKO Major League MMA organization. After winning his first fight, Ciryl won the Heavyweight belt. The next year, in 2019, C. Gane made his Ultimate Fighting Championship debut against Rafael Pessoa and recorded his first win and then followed up with an impressive run until he became the interim champion. The next fight for “Bon Gamin” will take place on January 22, 2022 and will be one of the biggest fights to date for the UFC heavyweight belt !